The Story of The American Pigeon, Cher Ami

Pigeons bred and trained for racing or for carrying messages are termed homing pigeons.They possess a remarkable sense of direction and can be trusted to return several hundred miles to their home lofts. Caesar used pigeons as messengers, and at the time of the crusades, there was a well established pigeon postal service. Thousands of homers are kept by clubs in America, and even more in Belgium for the sport of pigeon racing. A speed of 60 miles an hour over a course of 75 miles in not uncommon. 40 miles an hour is considered good speed over distances of 125 miles or more.
During the World War, where telephone and wireless communication was not possible, the services of these feathered messengers won for them the praise and admiration of the world. All the armies made use of them. At one point 12 miles behind the French lines, the British kept 60 pigeons housed in a London motor-bus. The outside had been roofed to form their cage, while the attendants, consisting of a chauffeur, trainer, and orderly, slept inside. A perch was cleverly arranged before the opening in the front, so that when the birds alighted on returning from their flight, an electric bell alerted the men inside, day or night. The pigeons were taken out to the trenches in baskets to serve as needed. If not used in 24 hours, they were released anyway with some message, to keep them in practice. Birds were always sent in couples with the same message, so if one happened to be killed, there would still be a chance of the message arriving safely. An American Pigeon, Cher Ami, brought help to the famous Lost Battalion of the 77th Division. They had written a message telling where they were and asking for help. This message they put in a little aluminum capsule, fastened it to the left leg of the pigeon, and opened the coop. Up Cher Ami rose until he was high enough, back to the American lines he flew, dropped into the coop there, and delivered the word which saved the battalion. Although seriously wounded when flying over the enemy firing line, he never wavered in his flight. They nursed him back to health and General Pershing gave the little hero a silver medal. When he died, his body was mounted and placed in the National Museum in Washington, D.C

The words in all Songs from the Book of Knowledge are excerpts taken from a 1939 Comptonâ€™sÂ Encyclopedia. The music is by Erica Harris, mixed with Garage Band.

Never did things change so fast as in these days. Your grandfather’s father may have seen the coming of the steamboat, struggling along the river or lying with its nose against the banks. Your grandfather saw the early railway train, which came pushing proudly into the world at 20 miles an hour. Your father saw the motor-car riding the roads like a giant of power at a mile a minute. But you have seen a thing that clever men and wise men hardly dreamed of years ago; you have seen a thing that clever men scoffed at even when it first appeared – you have seen an airplane riding through the clouds!
In all the history of the world there has hardly been anything equal to that. Think of it in any way you like, and it must seem to you a miracle. Throw a stone up into the air and it falls down; throw a stream of water up and it comes back to earth; throw a feather up and, although it floats a little while on the wind, it soon glides back to the solid earth.
They fall, all of them, by what we call the law of gravitation, which means that earth pulls everything toward its center. A pebble rolls down hill; water runs to the lowest point. It is the pull of something in the mass of the earth that draws all things toward it as a magnet draws a needle. It will pull a flint down through a chalk bank if we give it time; it will pull down an overhanging tree if the tree is left long enough without support. This universal power of matter to attract other matter to it, the larger mass attracting a smaller, is one of the mysteries that no man understands.
And yet an airplane flies past a mile above our heads, so high that it looks like a bird, so beautiful that it looks as if Nature herself had made it, so confident of its power as it passes out of sight that it thrills a man to feel that he belongs to the race that made it. Now it is a speck! Soon our eyes will lose it, but we know that there is a man up there.

Nearly all ancient peoples had poetic stories about the echo.
According to the Greeks, Echo was a mountain nymph who pined away for the love of the youth Narcissus until there was nothing left of her but her whispering voice, and this she could only use to repeat the last word of others.
When you called out “Hello!”, echo answered softly “Hello.”
And when you cried “Who are you?”, you heard only her mocking answer: “You.”
No one really knew what an echo was until wise men discovered that sound travels in waves, just as water and light travel. If a wave of water is stopped by a cliff, it is thrown back into the sea. So if a sound wave is stopped by a cliff, it is thrown back to our ears. The sound very seldom comes back just as it was made. It is usually broken into an airy shattered echo just as a wave is thrown back in spray. And it really seems as if some mocking sprite calls back from a fairy grotto in the rocks.
Sometimes the echo repeats the sound several times. This is caused by successive rebounds from several different objects, placed at varying distances from the observer. If you stand about a hundred feet from the reflecting surface, you hear only the final syllable of what you call. If you take your stand farther back, more and more syllables can be heard.
Sir Isaac Newton used the echo in a corridor at Trinity College, Cambridge to measure the speed at which sound travels. Standing at one end of the corridor he started a group of sound waves by stamping his foot. These waves were thrown back by the wall at the far end of the corridor. He timed the interval between stamping his foot and hearing the echo, he knew the distance to the wall and back, and from these factors, he calculated a speed for sound which was within a few feet of a second of the speed which modern science has determined. 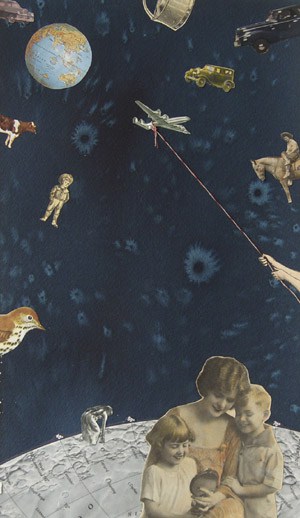 The mind of man can hardly conceive that life has ever been upon the moon, but as we look at this silent world and see with our own eyes the mighty record of its past, we feel a sense of the boundless mystery of the universe.
We stand on a world of life and look on a world of death.
We see spread out before us, in the full light of the sun, a landscape as vast as the American continent, with not a living thing upon it.
Not a flower blooms, not a tree grows, not an insect creeps, not a sound is heard, not a thing moving; the silence of a thousand ages is unbroken in this solitude that no man knows.
But it was not always thus.
The energies let loose in the world war were like children’s toys compared with the forces that must have once rent and torn the moon.
Unthinkable forces have made her what she is – beautiful to look upon as she rides in majesty with the Earth around the sun, but with a face all scarred and worn with time, and the mark of some great agony written over it.
Who is not moved by that picture of the moon which Professor J.A. Thomson has given us?
We may say of the moon, in his words, that “it was Earth’s only child, and it died.”

Here is a good game. Let everyone write on a sheet of paper, and it should be a large one, every important fact he can think of about water, including its special properties, the things it does, and what it is used for; the winner to be the one with the largest number of correct items in his list.
All the players will, of course, set down rain, snow, hail, ice, and dew, streams, lakes and oceans, the moisture in the atmosphere and in the soil. They will include also the use of water for drinking, washing, cooking, cooling our refrigerators and gasoline engines, driving our water wheels and turbines, and floating our ships.
Many players will probably recall that our bodies are about 70% water and, indeed, that all active living cells and tissue, vegetable and animal alike, must contain a certain amount of water to stay alive. they may add likewise that water is the greatest of all solvents, most of the liquid chemicals used in science, medicine and industry being water solutions.
Some players will know that countless ‘dry’ solids, particularly crystals like borax and washing soda, contain water; and that countless others, such as plaster, bricks, and concrete require water for their formation.
But how many will realize that if water obeyed the rule, common to most other substances, of contracting when it freezes instead of expanding, life would never have appeared on this earth?
And how many will know that it is another exceptional quality of water, its high specific heat, which largely controls the climate of our temperate zones and makes them habitable?
A thousand other such queries could be made. But one thing is certain about our game; no player will make a perfect score. To sit down and explain all the important facts that are known about water would require several books the size of this one and the author would need to be an expert in virtually every branch of human knowledge.